We Have a Lot of Trash to Treasure 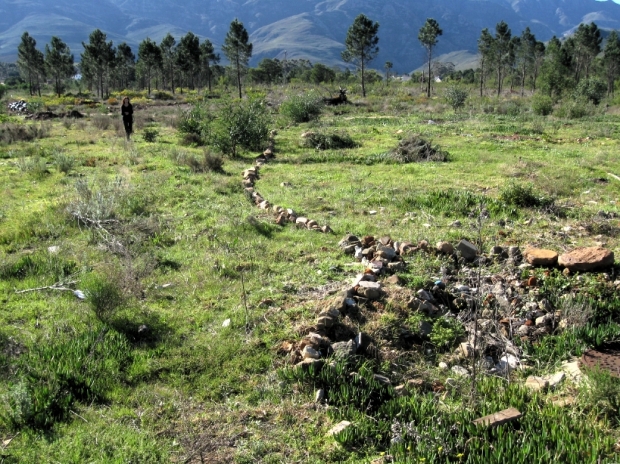 Within the first few weeks of living and working here in Greyton, many an opportunity had presented itself to work with children, students, community leaders, gardeners, and builders, and many a need had been expressed for support, leadership, and most of all – doing – within the communities from Greyton to Bereaville.

I knew long before arriving in this area that I wanted to write about waste management and the lack of it, and here I quickly found so very much to work with: disorganization, two festering dump sites and the edges of the towns riddled with resources disguised as rubbish. There was no shortage of trash to treasure, especially at the wasting sites.

Some of these words may betray some of the shift that has grounded itself within me as of late – that of viewing the plastic bag drifting in the street as the missing color in a new raincoat; seeing the chip packet or the styrofoam burger box as a bit of precious insulation; and most importantly recognizing the plastic bottle as a sovereign container of all things defying our ideas of usefulness and practicality.

But oh – how to share this with the others? Those who cringe at the thought of doing something with their waste other than throwing it as far “away” as possible? Perhaps with seeing what “away” looks like – at the edge of town where the trees and green are split with an open wound spewing plastics and building rubble. I thought of what it might look like to start having ‘visit your dump day’ once a week, if only to bring people to the dump site who otherwise might not ever go (just yesterday a long time Greyton resident admitted to me that she had never visited).

Together with Alex Camilleri and my host Nicola Vernon, we began to discuss other ways of shifting the tides and perceptions such as the idea of changing the name of the dump site. This led me to think about new signage and an inauguration ceremony with ribbon cutting – and then it clicked and I was there.

I realized that a proper gathering – a festival – would of course be the way to gather the threads, to bring together all of the wonderful people that we have met, and to all experience and share in that neglected space some vision of a more balanced and holistic way of life, perhaps even a zero waste life.

We have a week to go and a huge pile of art supplies, building materials and other hidden treasures known as the Greyton dump site. Come help us to transform it into a festival grounds and future ecological park, and make rehabilitation a celebration on Saturday, Aug. 4 at the Trash to Treasure Festival.